Before we went to Tignes I had a “To-Do List” of activities I wanted to do whilst we were there. Im pleased to report we ticked off quite a few. This could hopefully help people visiting Tignes with a baby/ children. Obviously we will need to go back to do the other activities we didn’t manage;) 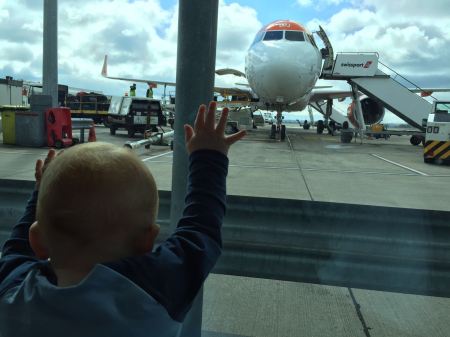 Turns out building a snowman is harder than you think, although I’m sure kids manage it? So after some failed attempts with snowmen that looked like a saggy Mr Blobby, we just claimed someone else’s snowman. Way easier. Not sure why he had a tail, but Arlo seemed pretty taken with it, well eating it to be precise. 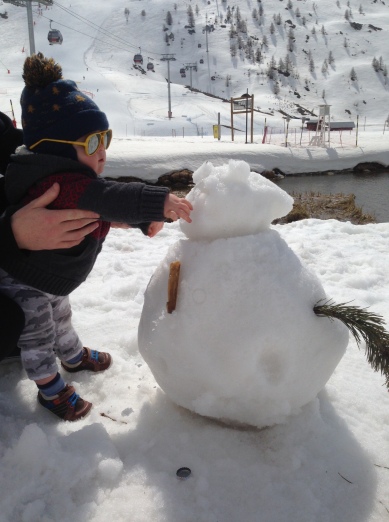 I thought Arlo would be WELL into this, adrenaline junky baby. We put SO much effort in, dragging him up the hills, and running down next to him. Then wondered why he wasn’t squealing with delight, and in fact, not even moving. I lifted his sunnies up and couldn’t believe it, he was having a sly 40 winks!! Caught red handed. Obviously sledging was waaaaay to lame for him. Next time bigger hills Mum! 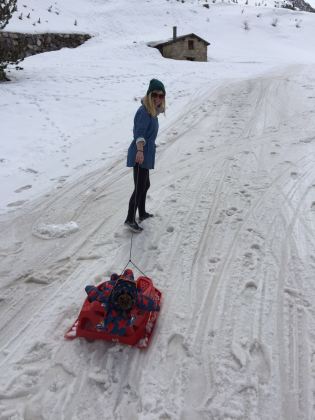 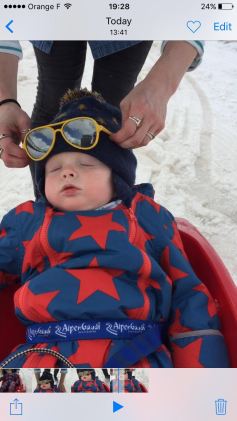 The main reason to go to the mountains was for Arlos first training session. After all, if he’s going to make the Olympics we need to get him started!! Was difficult as he wasn’t actually walking, but we found some fun ways to include him in snowboarding (see my previous blog post). It was so lush to involve him in something that has been so special to us over the years. 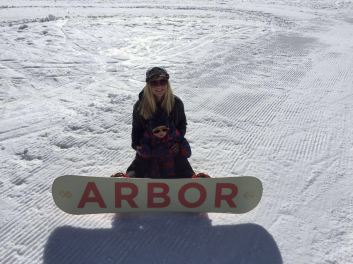 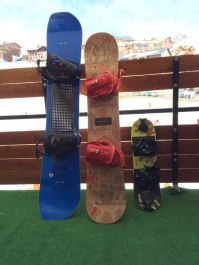 The swimming pool in Tignes is pretty epic. Mainly because of the amazing view …..plus the water slide. On a Sunday and a Wednesday they heat the big pool and baby pool up so its like a hot bath. Then put lots of toys and fun things in the pool and have an hour of fun. We went twice that week, saying it was for Arlo…..but secretly I think it was a good excuse to go and soothe our aching bodies from snowboarding ( actually felt like I’d been run over by a bus). 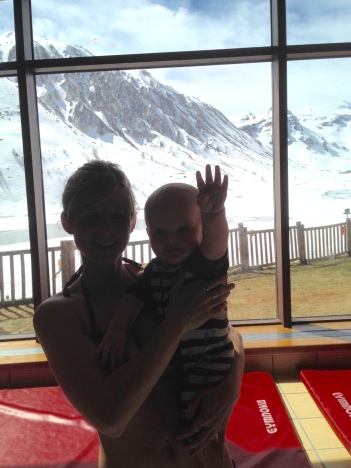 When in Rome. Ended up being the main part of Arlo’s diet for the week. Why not, WE’RE ON HOLIDAY!!! 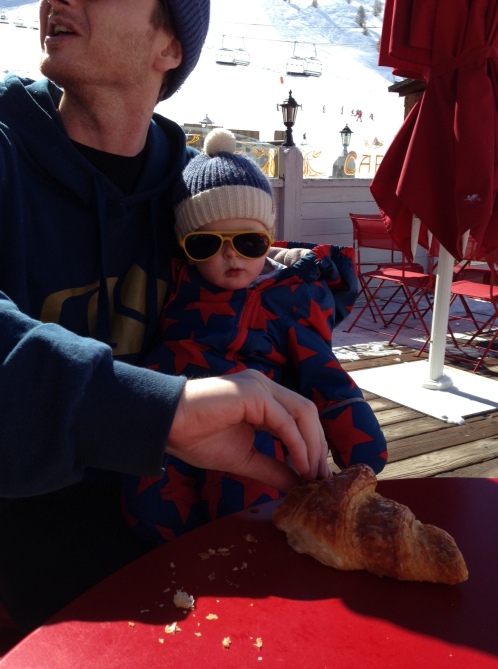 Chocolate was the obvious choice here. Safe to say Arlo was a huge fan. Pretty expensive in the mountains but well worth it for seeing the stoke levels from your baby. It gets messy. 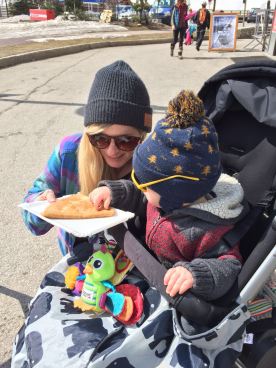 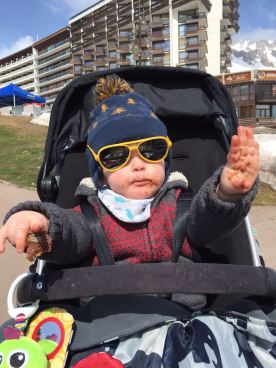 The best noodles in Town. A must! Sit out on the terrace and enjoy:) Arlo was intrigued by the worm like creatures we were eating. 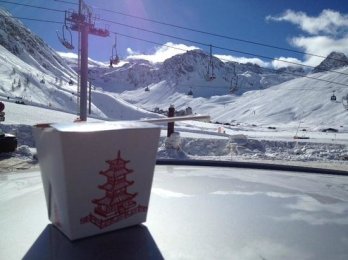 The lake in Tignes is beautiful. In the winter you can walk straight across the middle of it. Unless you are partial to a bit of ice diving, this is not recommended in the spring. But a walk a round the edge of the lake on the sturdy paths is just as nice. 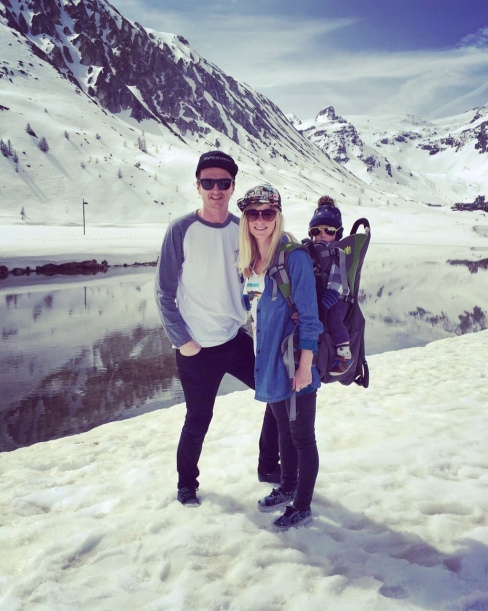 Visit a Snow Park (for a baby!)

We were no longer looking for rails and kickers…..now we wanted to find slides and swings. Most of the winter the childrens park is covered by snow. We hit it just the right time of year when everything was beginning to melt off. We could call this “Dry Land Baby Olympic Training” 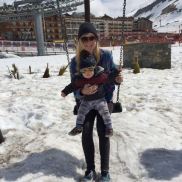 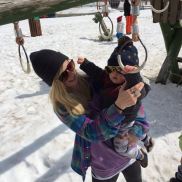 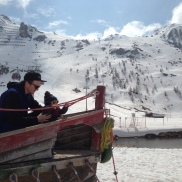 Waaaaay too drunk to get any photos of this…….JOKING!!! We managed to visit our friends bar (La Queue de Cochon and TCs) one afternoon. Arlo found some little mates and had fun trying his hardest to become part of their gang. Sure they had accepted the little ginger one by the end. Not sure he even realised we were doing Apres but it was nice to be in a bar again. Very very different Apres than “back in the day”.

We got 3 days on the hill, more than what we were expecting to be honest. And what a wonderful 3 days it was. You almost appreciate it a lot more when you have a baby (and have to pay for a lift pass!!!). You know your time is limited so you make the most of every second. No time for coffee breaks AND we got a powder day!!!

Falling flat on your face, getting snow wedged in your sunglasses and crying counts yeah? Not sure Arlo enjoyed ticking this one off the To-Do List. 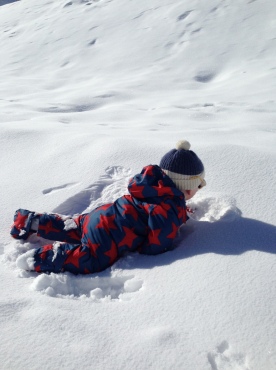 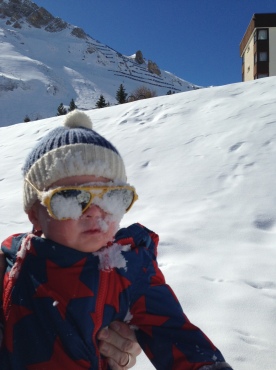 Again no photos of this as Mum got battered. Thanks Arlo (Dad)

Show Arlo the ACTUAL spot where we first met…..

Quite cheesy and I wouldn’t expect other people visiting Tignes to go to this spot and share a moment. But for us it was nice to reminisce where we had first laid eyes on each other 11 years ago ( well I cant remember seeing Rich but he spotted me because of my baby blue hairy boots with pink trimming……HOT). Formally known as “The Red Lion’ pub, it’s now a Spar…..yes, as in The Shop. Very romantic. Arlo just wanted another Croissant. 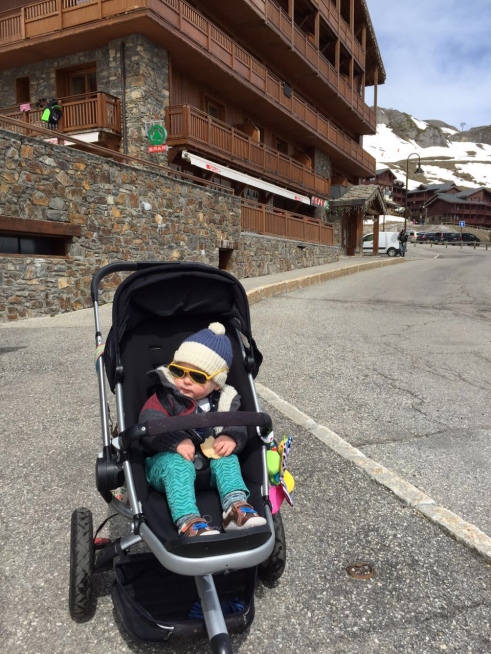 A massive shout out to Tignes Spririt for helping us sort everything out. See you next year:)