Hello its me!! Sorry it’s been a while, I’ve been busy rescuing Sally the Spider and her brother Stan and building them a house “to keep them safe” outside so we can play with them again tomorrow (successfully avoiding toddler melt down) AND stripping off to my underwear (non-matching) to wrap my toddler and baby in my clothes after they projectile vommed in my car and I forgot to pack any spare outfits…….. but here is an update on more recent times on negotiating life with 2……

Things Become A Luxury
A friend (another wise one, I have a few) said to me on my doorstep (as I cried and blow snot bubbles on her shoulder whilst she handed me over a Sleepy Head on day 3 of newborn baby Kitt), that now I had 2 children, things become a luxury. I totally get this now. I needed to lower my expectations. Someone else said (can’t remember who??) that having one child is like having a pet (Arlo was more like an angry Parana if that counts?), but anymore is like having a zoo. No word of a lie, I have gone nearly 2 weeks recently without washing my hair. There was that much dry shampoo in it that I had actually started to go grey (trendy?) and wherever I walked a puff of cloud followed me. So yes, things like general self-care (washing, plucking, shaving, dressing, drying) actually become a thing of luxury. And a hot bath (you know the sort…on your own, actual hot water, YOUR bubble bath and no plastic green turtles called Terry getting accidentally stuck up your backside) is THE HOLY GRAIL. I had one, for 10 mins, on 7/2/2018 at 6pm. 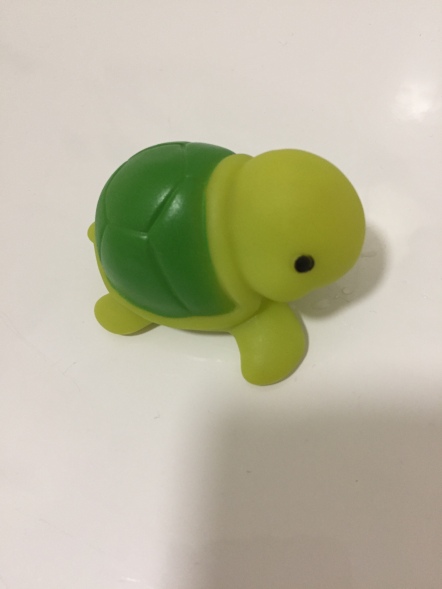 Time
YOU time is a thing of the past. Maybe im doing it all wrong?? But you just don’t seem to get any time to do anything??!! Like ever. How do people do it with 2 plus kids?? Hats off to you!! Must be hectic every day. I’ve not even had to deal with “the school run” and school stuff yet. Apart from the hour I spend in the gym (god bless the creche of dreams),  I ALWAYS have at least one child hanging off me. Oh actually, I went to Sainburys once by myself, was like a Spa Weekend!!
Day shift: kids (still weird saying kidS-as in I have 2!!) get up anytime from 5.30 (or has Kitt only just gone to sleep?? It’s all a blur), all day running around like a Hyena on speed making sure they are fed/watered/semi clean/ stimulated/ educated (Peppa Pig)….kept alive. Try to get them to sync their naps…….failing (again) and considering selling one of them on Ebay. Dinner, bath, bed (settle Kitt, settle Kitt settle Kitt….then so tired I go to bed)……….then the night shift begins. The long lonely shift. My aim was to be able to watch the X factor finals…..when that ship sailed at christmas time, my new aim now is to be able to come downstairs once the boys are in bed and have a Mint Areo watch Stranger Things. Always torn between having some “me” time and getting some sleep. Sleep normally wins. 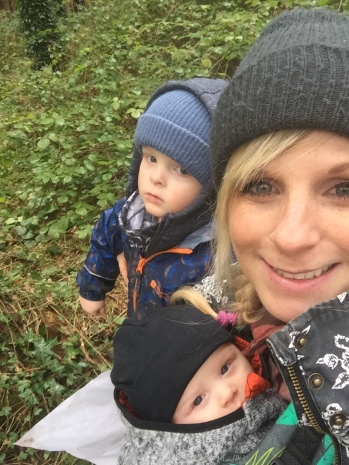 Sleep!
I am really blessed that I have 2 lovely healthy boys, but I don’t think I’m blessed with sleepers. Kitt is awful….just putting it out there, but maybe even worse than Arlo was??!! I feel like at the start people are understanding about the sleep deprivation, you have a new-born! By 7 months, people stop asking how sleep is, even though the sleep deprivation is even worse now as its accumulated over a whole 7 months. Sleep is EVERYTHING, without it, everything is pink and fluffy and there are unicorns and rainbows and sometimes dragons. Im finding it hard to function and definitely feel like a shadow of my former self with the worst/ most boring/ dribbling chat…..normally about how much sleep I had last night. I have googled “can you die from sleep deprivation”, and in fact you can’t. But some days I really feel like I might. I need to try to do something about it, but im too tired to haha!!

Kitt
So so different to Arlo, weird how they end up so different when they both came out of my fanny. He is honestly the happiest, nicest, smiliest baby ever! (not that Arlo wasnt, he was just different). Poor Arlo cried pretty much constantly for the first few months of his life. Was so unhappy and unsettled (lots of medical things) and was just angry. He was chomping at the bit for his independence (fully crawling at 6 months), didn’t like to be smothered and wanted to do his own thing. Also had the attention span of Dory the Fish. Kitt however is just happy to chill and watch the world go by, no need to “get going” when you can just sit there and smile at people for kicks. He loves a cuddle and lives in the sling. You can give him a Duplo block and it will keep him happy for hours. So it would seem that actually Kitt just doesn’t need to sleep. He has 3x 20min “power” naps a day, and normally wakes every hour at night…a good night is every 2. Once I got 3 hours. But he is happy?! 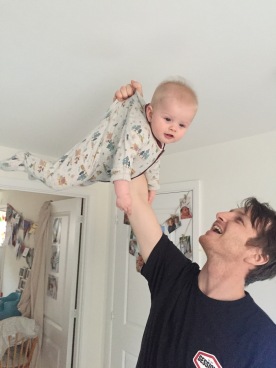 Sibling Love??
Apart from Arlo saying “Baby Tit die” (he means baby Kitt cry), Arlo hasn’t been too interested in the new edition. I think when he’s a bit more interesting and he can play it will be a different story. Occasionally Arlo will give Kitt a toy (and I feel like crying it’s so beautiful to watch), but apart from that, Kitt unfortunately is just a part of the furniture. Kitt on the other hand LOVES Arlo. He just watches him all day and smiles at him and laughs (particulate when he’s crying?? Not got emotions sussed yet). He tries to touch him and just be as close to him as possible. Even started doing this really loud seagull impression to get Arlos attention, which obviously Arlo is VERY keen on……. 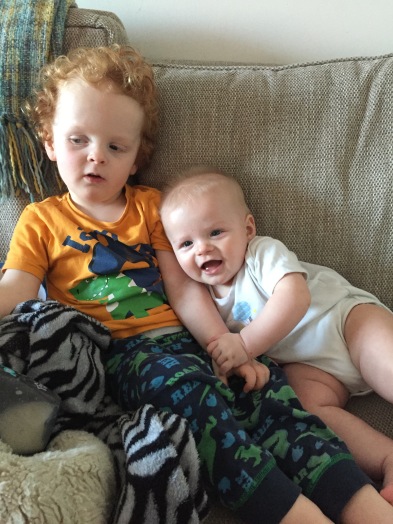 Weaning
I literally hate weaning. Just milk and boobs are so much easier. Decided to give baby led weaning a whirl this time for a change, but oh my it is MESSY. And so far I think only 2% has made it into his mouth (the dog has become rather plump??) But then apparently this is normal and just have to go with it. Also the choking and puking apparently normal too….but I freak out so much each time. The faves are cucumber, strawberries and broccoli….which to be honest if he just eats these three, it’s already more fruit/ veg than Arlo eats so thats good:) I’m also trying to wean Arlo again (he’s super fussy). Three and a half weeks ago Arlo licked a piece of broccoli. This was a real break through. 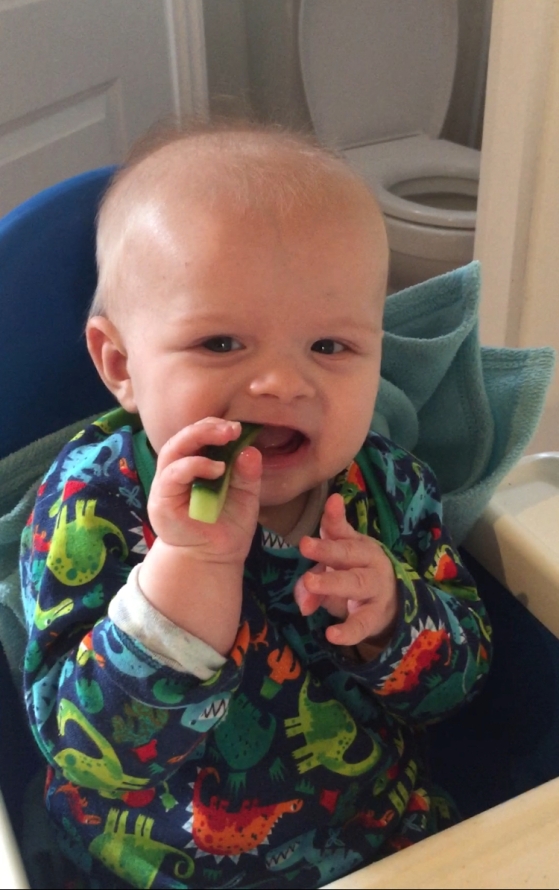 Snowboarding
So in other news…….WE ARE GOING SNOWBOARDING (although don’t want to jinx anything….so jinx, double jinx, touch wood etc). Starting off in Tignes which is like our second home, where we met, where it all began, where love was found blah blah blah. Then over to Morzine to cat sit for a friend (the cat will not be snowboarding however, he is a skier). Literally so excited, but like I said I don’t want to jinx anything. I’m not having any expectations of how much riding we will actually get it with a red-headed toddler and milk sucking vampire baby in tow, but just to be in the mountains and in the snow will make me very very happy indeed. Im sure I will actually cry when I first see the mountains again ( I wanted to last time but Arlo got travel sick on the way up and it kinda tainted the special moment).  Hoping to get Arlo on a snowboard properly this time and not just posing on one for Instagrams. He has been “snowboarding” around the living room, tail pressing cushions and 180s (assisted) off the sofa. And he’s really got the idea that he’s going snowboarding soon (like asks me a zillion times each day if we can go snowboarding now)
Obviously Kitt will be snowboarding too, that goes without saying. 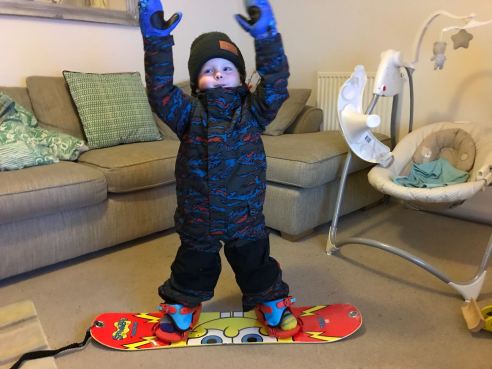 I do have an ulterior motive however……… I want Rich (husband) to see how fun and “relaxing” it could be in the mountains as a family of 4 and realise that we need to relocate there ASAP….to follow Arlos Olympic dreams of course
The only bad thing for the trip so far is that my husband will already be out in the mountains. So this means I will have to fly out BY MYSELF with a toddler and a baby. HOLY FU**KI*G SH*T, I may not survive. It will be worth it though, and an adventure?!

I’ve noticed now my toddler is getting older I have to be a lot more careful what I say ie: fuck, shit, bollocks. But also, a lot of white lies are spun (these are good aren’t they?) and twists of the truth are spoken to help keep their innocence/ control them/ make parenting easier. Here are some “phrases” I’ve found myself using in the last month…..

Dead fox on the road…..”Aw he’s just having a little sleep, he wanted to have lots of energy for crossing the road later”….Mr Fox will be asleep for a very very long time

Jazz things/ places/ food up by saying its SPECIAL……” ah this is a special sandwich” or “we need to go home to do some special things now” (actually nothing at all, but hopefully will entice toddler into car and he will totally forget about it by the time we get home)

“Santa wont bring you any presents”….I went through such a tough time after christmas when I couldn’t use this bribe a million times a day, I mean, what do other parents do in the “off-season”? But really, I’d been buying presents since September, I was never going to cancel christmas and not give him anything, seriously

“I’m so sorry, the machines broken”…seems to be A LOT of broken machines around these days. But why do they always want to go on the yellow plastic bus ride outside Sainsburys, or get some weird wind-up toy from the slot machine in the theme park. Damn the children that then go and “manage’ to get the machine working right in front of us and spoil my master plan.

When friends/ animals/ family have to leave our house after visiting…..”Lottie (dog) has to go home for a sleep now”….she’s a dog, she doesn’t have to go home for a nap/ dinner/ milk/ stories etc. but this seems a totally acceptable reason for ending a fun time and saves a toddler melt down

Comes home with ANOTHER beautiful drawing (smudged squiggles on a tattered piece of paper), the first few I certainly kept, but can’t keep them all, can I? …… “where’s my drawing?????”…..”Ive put it in a very special place, where I keep all the most special things” (ie: the bin)….bad Mum

“ah im sorry, all the yogurts/ chocolate/ bacon/ snacks have gone now”…….still 5 chocolate bars in the cupboard that I will sneak into the bathroom later and scoff and hope he doesn’t catch me. He’s becoming wise to my secret Mum bathroom retreat

”Magic cream” pretty much any cream ( Vasaline, nappy rash cream, Fairy Liquid?!) that makes everything better in an instance

“The Dinosaur eggs in the garden (stones) still haven’t hatched…..because they only hatch in the summer time”…….buys me a bit of time to think up new excuse as to why stones haven’t hatched beautiful spikey baby T-Rexs….