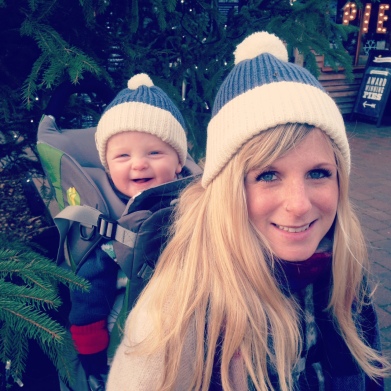 So you might have seen in my million Instagram’s (I’m really sorry about all of them) that we often use a baby backpack to get around. This not only gives Arlo his own little mode of transport (he thinks he’s in a Convertible up there), but it opens up the places you can go walking that aren’t good for prams. I wanted to be able to take Arlo on the sand/ rocks/ snow…..skateboards/ snowboards??!! EVERYWHERE!!

Why not a sling or normal baby carrier I hear you say? Have you ever tried to carry several bowling balls on your front?? or an over excited Hyena?? Our few walks with Arlo in the sling were similar to a vigorous Army Weight Training Program.

Before Arlo was born I had a sling (ok, 3 slings), beautiful laid out, ready to use for our baby. I loved the idea of wearing my baby, having my hands free, just looking down and seeing him all nestled in my boobs!! ” They liked to be cocooned” they said, “swaddled and close to their mummy, they like to feel secure”…….oh no, not this baby. Even from the first night in hospital (when I’m sure they aren’t really supposed to do anything?), I kept wrapping him up in the blanket, but he would somehow find a way to wriggle out of it.

The older he got, the more he thrashed, and my outings in the sling would be greeted by high pitched screams and attempts at suicide by Arlo trying to dive bomb backwards out of the sling. He did not like to be contained. I got fed up of people passing me on the street and saying “oh, someones not happy??”….. And the screams are REALLY loud when the baby is attached to you!

He would eventually cry himself to sleep bless him, but it was a traumatic experience for both mother and baby!!! 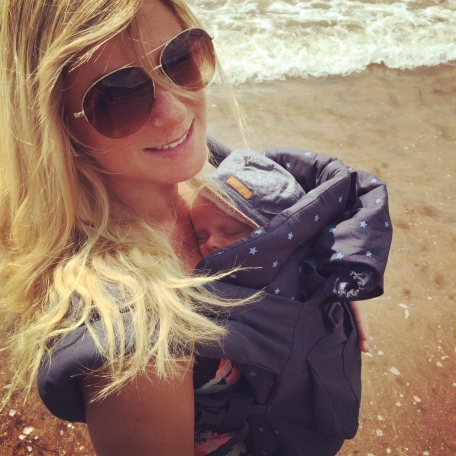 Once I tried to wrap him up in one of those material slings, but he was so wriggly it was near enough impossible. His head ended up under my armpit, his leg in my cleavage and his arm near my nose??

The only way he liked the baby carriers is if he could face outwards, I guess he felt more free that way. Curious Arlo could observe what was going on. But we got to the stage where he was so long that his legs were dangling down by my knees and not only did I look ridiculous (umpa lump) but I was finding it hard to walk. I thought people were looking at me because he was such a cute baby, but when I looked back at pics I realised these looks had been of shock/ horror because Arlo was nearly the same size as me. I decided I had lost the spring in my step and something had to be done. 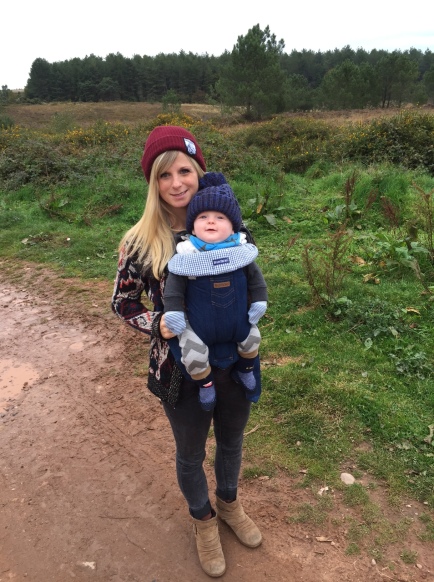 So here comes in the baby back pack!!! Life saver!! The inspiration was actually from my Dad, he used to use a baby backpack/ or just a regular backpack (!!!) to carry me around in the olden days! I think I was a similar baby to Arlo and very wriggly. 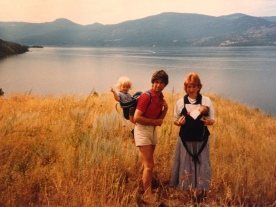 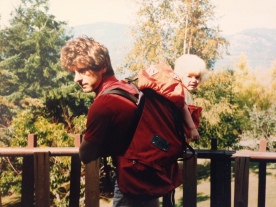 Today we use the Littlelife Adventurer Child Carrier. It says you can use it until the child is 3, but I feel Arlo will be taller than me by then so our window might be smaller? Maybe we could take it in turns to carry each other??! 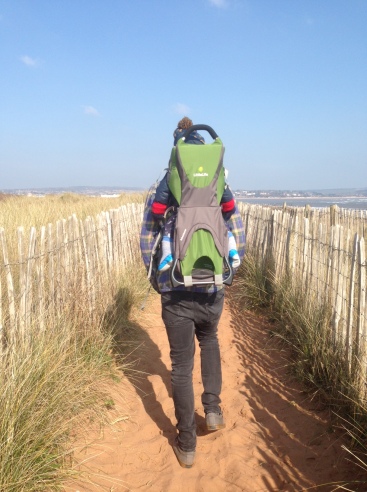 It’s great, it distributes the weight to your hips so its easier to carry a heavy baby. It has adjustable straps for when they grow, and even has a secret pocket to put all your baby bits in (I didn’t actually find this until last week) so you don’t have to carry yet ANOTHER baby bag! It also has a pull out stand so “technically” you can just stand the baby up on the ground to just chill. Maybe pop him next to the table with you? But if you are in possession of a wriggler, this is not a good idea, they WILL capsize! 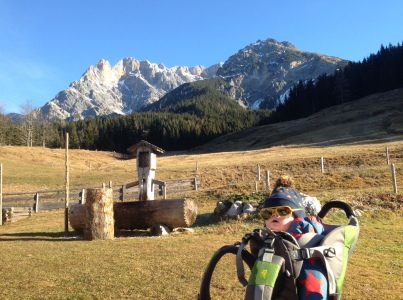 The baby has a good view point up there, I swear Arlo thinks he’s on neighbourhood watch or something. But this does distract him from trying the escape. Unfortunately the baby is now at the perfect height for vomiting on your head (is this good luck? or is that bird poo?). And of course you now have the issue of hair pulling. We found putting some little mittens on Arlo (even in the summer?) prevents bald patches.

Now he can kick his legs and fling his arms around to his hearts content. He just so free up there!!!!! However it’s difficult to keep a tab on his activities because he’s on your back. So I recommend taking a friend with you, or a mirror so you can have a look at him. Or use the selfie mode on your phone…..which means you get some good photos too!! 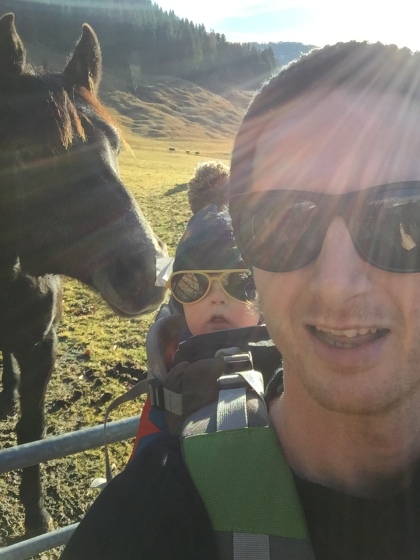 I also thought there was nooooo chance he would sleep in the backpack. But he has actually been caught red handed grabbing 40 winks!! Miracles do happen! 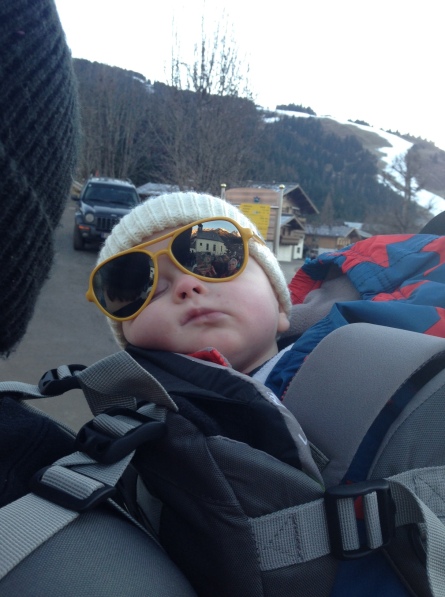 The baby backpack really does give you the freedom to go anywhere…….although I must admit you do look a bit silly doing the Tesco food shop or the housework. And its actually a great workout, feels like you’ve done 100 squats in the gym after carrying a large baby for 30 mins! Arlos new favourite game is to hit who ever is carrying him on the shoulder (does he think he is on a horse now??). So it’s basically like having a personal trainer on your back telling you to go faster! 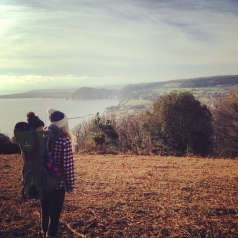 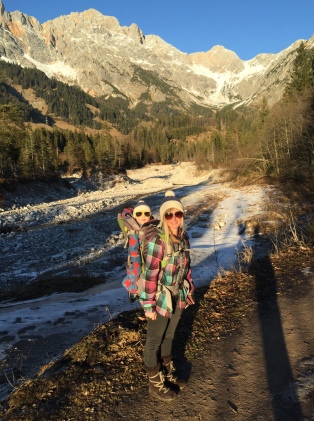 I know some people reading this might think this is really silly of us, but I wanted to write about it anyway as I wanted this blog to be honest!

So, you will need one baby, one baby back pack, one skateboard and one (crazy) person…that can skate VERY WELL. This counted me out straight away. To be honest, even if I was an amazing skater, I don’t think I would have had the guts to do this. So I just posed for a photo and to “warm- up” the baby. 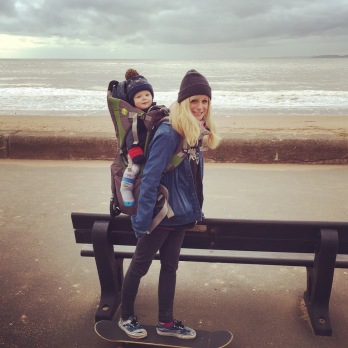 This was a spontaneous activity and thinking back to it now, I would have 100% put a crash helmet on the babies head, and in hindsight, this was probably a very dangerous activity to do.

Under strict instructions, Rich was only allowed to go in a straightline, for 10 metres at the pace of an elderly snail.

Luckily all involved survived, me included as my heart was in my mouth the whole time. I feel like we had maybe taken this adventuring with a baby thing a bit too far this time? Its weird, I always felt if I had a baby I didn’t want to wrap them up in cotton wool. But when you have a baby this is EXACTLY what you want to do, cotton wool AND bubble warp! Looking back on my life, in particular my snowboarding, I dread to think what I’ve put my parents through. But you only realise this once you have your own child and develop all those protective parental instincts. Im sure Arlo will give me some karma when he’s older!! 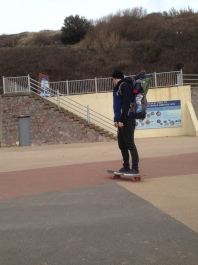 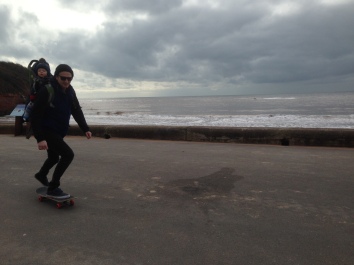 Anyway, thank god Arlo LOVED the skating, smiles from ear to ear!! Made me feel a little less guilty/ bad mother. And thankfully no one was there to give us disapproving looks.

He even had a little cruise around standing on the skateboard by himself (Rich got in the way for the photo). Might be time for those mini Vans??! 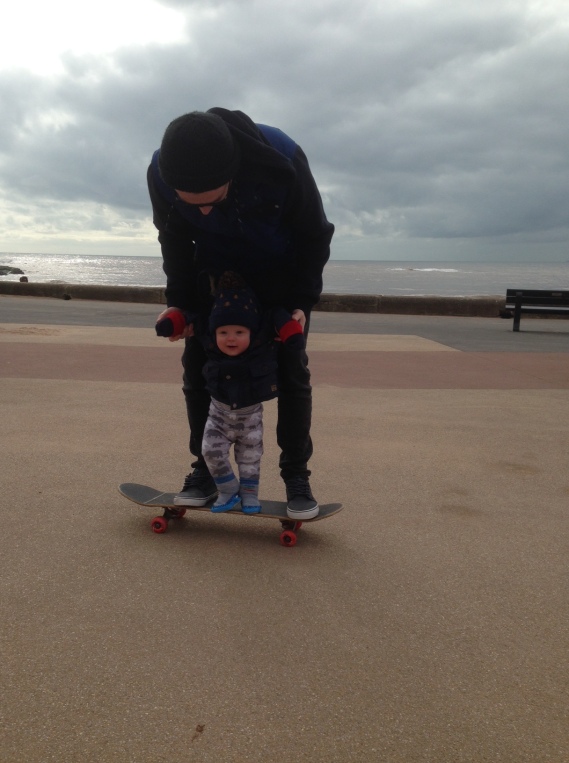 This has planted the seed and made me start thinking about doing this on a snowboard??!! A helmet and snow I feel could be a safer option. And a industrial packet of cotton wool!

Arlo has developed an obsession for a bicycle pump. Not a nice cuddly toy bunny/ blanket, a bicycle pump. Wants to take it everywhere with him!! So we thought we would treat him to an ACTUAL bike ride!!

I had been given a baby bike seat for my (21st??) birthday back in November, and we have been waiting since then to use it. We needed a day that Rich was off work, the weather was good, the baby was well. And until last weekend, we couldn’t seem to aline all 3 things at once.

The day dawned, the sun was shining, Rich was off work and the baby was semi well (I’m not sure these babies are ever 100% well??? Fresh air would be good for him anyway?) TODAY WAS THE DAY!!!!

Realised it was actually quite blustery out there, some would say gale force?? So wrapped up Arlo to within an inch of his life, so much so he couldn’t actually move (an amazing discovery, will be using that outfit again!) 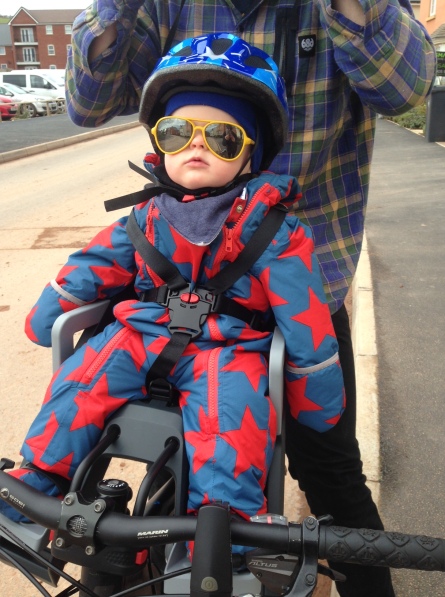 After a few “teehing” problems ( Arlo in all his layers was actually too fat for bike seat…..helmet was too big for Arlos head….does he need suncream in cloudy weather….. can he get windburn…..does he need sunglasses……will he be warm enough…..is he too hot…..can I actually remember how to ride a bike….oh god whats that smell…….nappy change), we were ready! We then realised that we were totally unprepared and the bikes wouldn’t fit in the car, adventurous laps around the block it was then,  and perhaps down the country lane that I used to go “running”.

The bike seat we have is one of those ones you attach to the front of your bike as opposed to the back. For the adrenaline seeking baby this is a great invention as their vision is not impaired by your backside! They can really get the feeling of wind in their hair (albeit gale force). In fact, I’m convinced Arlo thought he was actually driving the bike.

Wooooo we were doing it, first family bike ride, so much fun…….10 minutes into the ride and the novelty started wearing off and I realised I was yet again on a bike, ouch. How could I still not be ready for this? I had a baby 9 MONTHS AGO!! We stopped for Arlo to look at the cows (thank you cows). 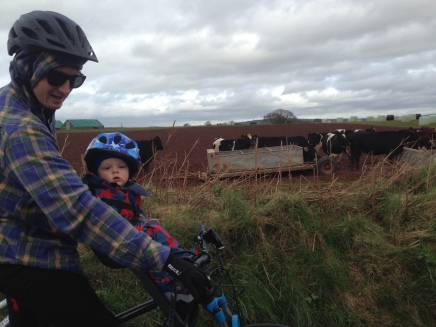 Arlo had been loving life, but now he looked strange, almost squiffy. The only explantation was he must have swallowed a fly! God I didn’t even think of this! How do we stop this??!! No wonder he looked odd. 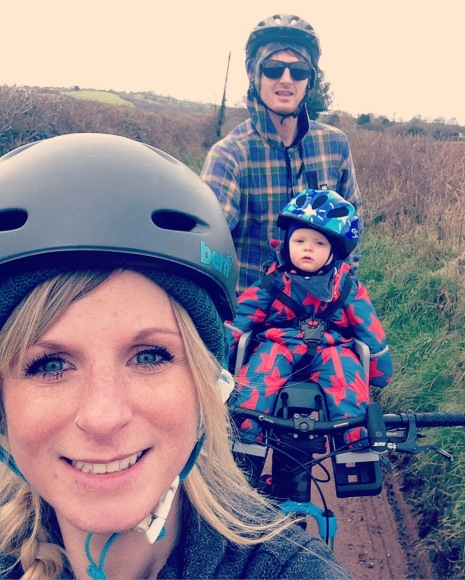 After Arlo had composed himself again, we continued. Even though I was babyless on my bike, I was seriously lagging behind. Had going to the gym done nothing at all????!! No, my bike must be broken, definitely holding me back. Not my fault at all.

The thing about bike riding is the idea of it is so nice! But when you’re actually doing it, the flats and the downhills are the only fun bits. Uphills, you see your life flash before you. BUT the good thing about having a baby with you (as with any of these outings) is you can totally make the excuse that even though you would LOVE to carry on, you should probably get back for the baby.

Excuse made, and off we cycled, homeward bound for Rich to look at my “broken” bike and investigate Arlos mouth for flies.