So I have written a recap for Ticket To Ride (Recap-Girls Snowboard Camp)   already….this is semi professional I guess. Here is a recap from “megamum”s point of view (ie: talking more about kids/ boobs)

As you may know, I was previously supposed to host the last 2 camps….first year…..got up the duff, second year……had a baby still attached to my boobs 24/7 (maybe not what the girls would sign up for?). Third time lucky and I was back in the game. Jenny Jones was my replacement. In fact, I think I actually did the camp a favour as getting Jenny was a waaaay better deal! Sorry 2019 ladies

I was nervous leaving the boys. I knew Arlo would be fine as pretty sure he doesn’t like me that much anyway?! Plus I had left him before, but only for 2 days. Kitt I had only left for 24 before. A whole week was a different ball game

And yes, I was still BF, which I had no idea I would still be doing when the camp came around, Kitt is 21 months! Would Kitt survive? Would the empty Capri sacks survive?!

The most exciting thing was, my husband would have the kids for a whole week and finally see how hard it was motherhood could be….on zero sleep. HE would have to get up in the night. HE would have to do 4.30 am starts. Finally he will understand……finally…….oh how the tables had turned, me going snowboarding for “work”*

*Husband sent kids up to Granny and Grandpas for the week

So leaving motherhood behind, I set off to Meribel with 2 free hands and a bag free of snacks and baby wipes. Oh how beautiful it was travelling solo. The anticipation of a week of sleep by myself was very exciting.

I met some of the girls at the airport to get the transfer. As soon as I met them I knew the week would be fun. The drive up to Meribel was soooooo beautiful, I had forgotten how magical he mountains are. I definitely took it for granted when I lived there. 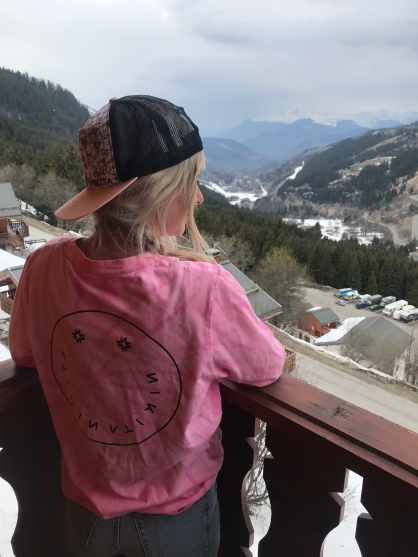 The chalet was bloody PIMP, hot tub and all! The rest of the girls arrived and honestly, they were the coolest bunch of chicks. I felt so lucky. AND a few of them were mums too! I hadn’t even considered that, I’m not sure why. But of course, it made total sense that shred mums would come! Like minded girls that used to do seasons/ snowboard, then had kids and wanted to get away for some kid free shred time. YES!!!! This also made me feel more at ease I think. We were all in the same kid free boat. One chick was leaving 8 month old twins, she was the most hardcore in my eyes!! 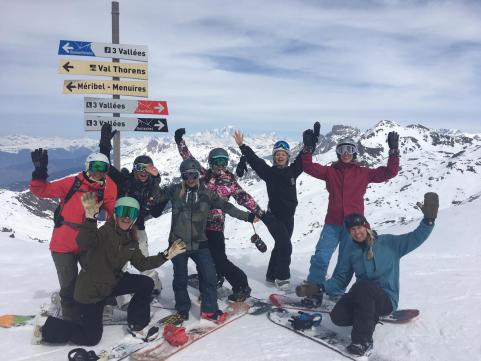 Then the legend (and also mega friend of mine) Cozza arrived. She was to be the coach, and I (Katie-washed up snowboarder) was to be the host. I think (hope) we made a good little team me and Cozza. I literally couldn’t have done it without her. Plus I had never actually been to Merible before!!!! Was terrified at the fact I was hosting a camp there, but luckily Cozza knew her stuff.

I won’t go into what we did every day……but we had sunny park laps, powder, bluebird, flat land jibbing, tree runs, hot chocolates, too much afternoon cake, yoga sessions, quiz night (what happens at quiz night stays at quiz night), chick flick night, girls chats, wine, amazing food that ruined bikini bodies, hot tub plunges (see pics),,,,,I even had a nap! Felt like we covered a lot in one week. I put my heart and soul into the camp, but honestly, it never once felt like work to me.

I even got to do some park laps, maybe only 4 or 5 but oh my it felt gooooooood, also sketchy ha!

My boys back home were having a whale of a time, and I was so busy that I didn’t even get a chance to miss them that much. I guiltily was enjoying not having to clean poo off puzzle pieces and watching Peppa Pig. And obviously SLEEPING/ drinking HOT tea on my own/ toilet on my own/ etc

AND GUESS WHAT……..reports were that Kitt was now sleeping through the night??!!! He has never once slept through for me? Say what?! Is it me????

Left the camp a day early to get home as we were flying to the Philippines a day later for my brothers wedding (blog coming soon). Was pretty gutted not to see it through to the bitter end, but you know, when you have to fly to a tropical country with white sandy beach’s and crystal clear waters you just have to do it.

DO NOT READ IF YOUR SQUEEMISH…..the camp for me was more than just a camp. It was the first time since kids I had really felt like me again? Katie the snowboarder rather than Katie the Mum ya know?! Even though I was technically working, it felt like I was doing something just for me.  I definitely felt my confidence coming back as the week went on and loved the novelty of something completely different to my day to day life in the UK. I may be pretty late to the game, but it even made me think about properly coaching? Crazy idea I know.

I really had a ball, and hope the girls did too. Thank you all so much again for comingJ

The camp is on again for next year….and watch this space for more exciting things in the future……..

I can confirm that Kitt is NOT sleeping through the night…it IS me:(

My boobs were fine, Kitt returned to his habitat as soon as I got back and hasn’t looked back since!!

Arlo didn’t notice I was gone